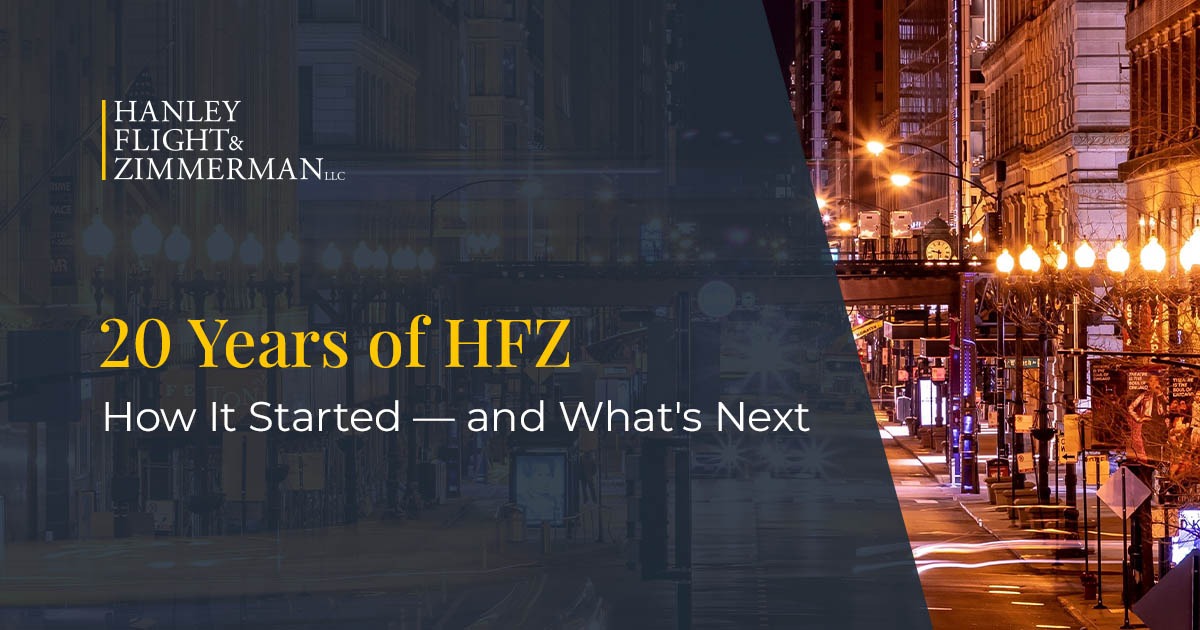 That’s not just a milestone anniversary Hanley Flight & Zimmerman is celebrating this year.

It’s a number that’s symbolic to the company’s origin story and success.

The three were inspired to do something different. Build a firm that rewarded excellence, not just billable hours. Work as a team, not just as individuals.

And most importantly, focus only on patent prosecution, securing 20 years of exclusivity for inventions of the world’s leading corporations.

Twenty years later, those ideas continue to make HFZ a success, and a firm trusted by the best. The law firm represents seven of the top 25 patent-earning companies in the U.S., and its client roster includes Ford, GE, VMware, McAfee, Texas Instruments and Nielsen, among others.

“HFZ helps some of the most innovative companies in the world invest in cutting-edge technologies that advance the quality of life in countless ways for people around the world,” Jim Flight says.

“The U.S. patent system has been instrumental in building the most powerful economy in human history and has driven some of the world’s most significant technological developments. Without patent protection, the amount of investment in new technology will fall.”

Before the three founders realized their shared goals in patent law, they had similar stories growing up and early in their professional careers. They came from working-class backgrounds and were interested in engineering before pursuing law school at night to become patent attorneys, a path not only followed by many HFZ employees but encouraged and supported through the firm’s mentorship program.

As a youth, Mark Hanley tinkered with things and mowed lawns, including the yard of a patent attorney who showed him what his job was like. Years later, Mark left his electrical engineering career to pursue patent law.

Jim Flight was introduced to a patent attorney through his father, a carpenter who had worked on the lawyer’s home. Later, Jim was led to pursue patent law by the father of a college friend who opened his eyes to the legal world.

Mark Zimmerman grew up in his family’s construction business, Wm. Tonyan & Sons of McHenry, Illinois, before becoming an electrical engineer and later working for Motorola before entering law school.

After landing at the same law firm, they saw a changing market for IP legal services. There was an industry need for a service-oriented firm that focused on securing patents ready for enforcement.

They also had a common desire to build a unitary business rather than operate as a group of individuals sharing space and competing for staff and associate resources.

“A new firm for the new approach was really the best option for us,” Mark Hanley said.

They launched HFZ in the Civic Opera Building at 20 N. Wacker with five partners, one assistant and a handful of clients.

“We really have a solid team at HFZ,” Mark Zimmerman said. “During our time, we have seen substantial growth in the diversity of people practicing patent law and we have recruited top-notch women at all levels of the firm.”

HFZ’s accomplishments include a collection of world-class technology clients and a highly skilled team of patent practitioners, but Mark Hanley says there’s another:

“Prospering during the economic downturn of 2008-2009 and the pandemic without having to lay off a single person,” he says. In fact, HFZ saw its practice grow in those times with some clients sending more work to ensure the firm weathered the storm.

The founders purposely built the firm to operate as one, with everyone rowing in the same direction, and they put this into practice. One example is the firm’s mentorship program, which provides new hires with frequent feedback, both qualitative and quantitative. It is a significant time investment, but it ensures alignment across the firm – and helps address any issues before they become problematic.

“There is solid trust at the base of our relationship,” Mark Hanley said. “This allows us to push ideas around, challenge the ideas, and work to get to the best solution to the problems we are trying to solve, without resulting in bad feelings toward one another at the end of the day.

“While we may work relatively independently on many tasks and our day-to-day legal work, we stand ready to back each other as needed in difficult situations of all kinds, including client relationships, legal questions, and management problems.”

As for the next 20 years, Mark Hanley says he’d like to see HFZ add to its already great client roster and deepen its excellent team of practitioners and staff who truly enjoy what they do.

“We are grateful for everyone at HFZ, the partners, attorneys, patent agents, and staff, that day-in and day-out focus on performing at the highest level of quality and that make working together so enjoyable,” Jim Flight said. “We also want to thank our clients who have put so much trust in us. We are honored to be trusted by the best.”