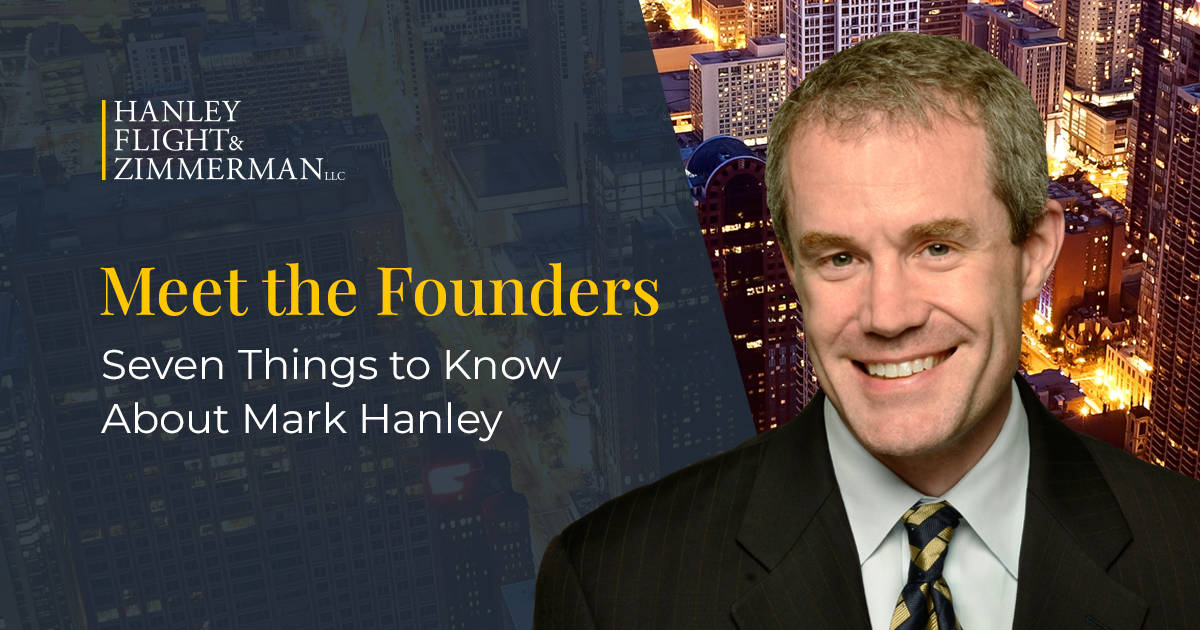 Hanley Flight & Zimmerman doesn’t just make Chicago proud as a top intellectual property law firm. It also stands out as a business where the founders read books about rock band dynamics to make sure they’re staying the course.

Here are seven highlights from a recent conversation with co-founder Mark Hanley, covering his history with the firm, how he got there, what HFZ offers clients – and what Aerosmith has to teach us all.

He became a patent lawyer after working as an engineer for a decade.

“I was in product development, where several of the devices we developed were the subject of some patent applications. I was a joint inventor on all of them,” Hanley said. “You sit down with the patent attorneys at some point to talk to them about your invention. And I got curious one day and talking with this patent attorney that came in to speak with the group.”

He learned that the attorney had originally graduated with an engineering degree before deciding he wanted to take a different course.

That triggered a memory from when Hanley mowed lawns as a preteen. A patent attorney client offered a peek into the future.

The attorney noticed that Hanley enjoyed fixing things and tinkering with his mower. So he called him over one day to look at his work.

“He had all these papers spread out,” Hanley said. “And he said, ‘You know, I’m a patent attorney, and I work on inventions. And I was an engineer. And I like tinkering with things, too. But I thought I’d show you some of these.’ And they were published patent applications.”

While as a youth Hanley understood the conversation as a nudge to become an engineer, the lightbulb went off for him as an adult. Maybe he was meant to do more.

At that point, he made a major life change. He decided to quit his job and become a patent attorney.

The engineering business was changing, with work being outsourced to Taiwan.

Hanley ended up leaving his engineering gig altogether. “I ended up finding a job at a firm in the city, working for them during the day and going to law school at night,” he said. “And that’s where I met [Mark] Zimmerman and [James] Flight.”

After starting the firm, the founders haven’t forgotten what it was like. They offer that support to new employees making similar changes.

The point, he noted, is that law school isn’t forever. The firm supports those going through the process. And it makes great business sense, too; people that work with HFZ during law school can hit the ground running when they graduate.

The company’s positive culture makes a difference, both to those working there and those who hire HFZ for IP work.

Hanley acknowledges that law firms can be challenging environments for employees. But HFZ’s folks enjoy their work and are satisfied with what they do, which he ranks as an important accomplishment.

But that’s just one side of the coin. “The clients give us great feedback. They’re very happy with our work,” he said. “I’m pretty proud to hear things from some of these bigger companies, like ‘You’re our favorite prosecution firm in the country.’”

What three words would he use to describe HFZ?

“Serious. And I think we’re serious about the work. That’s where that comes from.”

Flexible. “We’re very flexible toward individuals and what’s happening with them personally,” Hanley said. “But also business wise … we try to take our ego out of this stuff and think about it. Maybe we’re doing it wrong, you know. We revisit things all the time.”

Determined. “We are determined to make it work. We don’t give up.”

When asked where he found unusual sources of inspiration, Hanley noted a very specific genre of nonfiction: books about rock bands and their dynamics, especially one by Joe Perry of Aerosmith.

“The business part of this rock band thing is really interesting,” he said. “Because it’s personalities, right? … The way these guys work, it’s like a partnership. And they have all this business to conduct.”

In a focused law firm, members need to approach each other with empathy and understanding, he said – and seek harmony among the different parts.
“You can’t just get emotional or let the emotion carry you away, because that’s when bands break up, right?” he said. He added: “Going solo almost never works.”