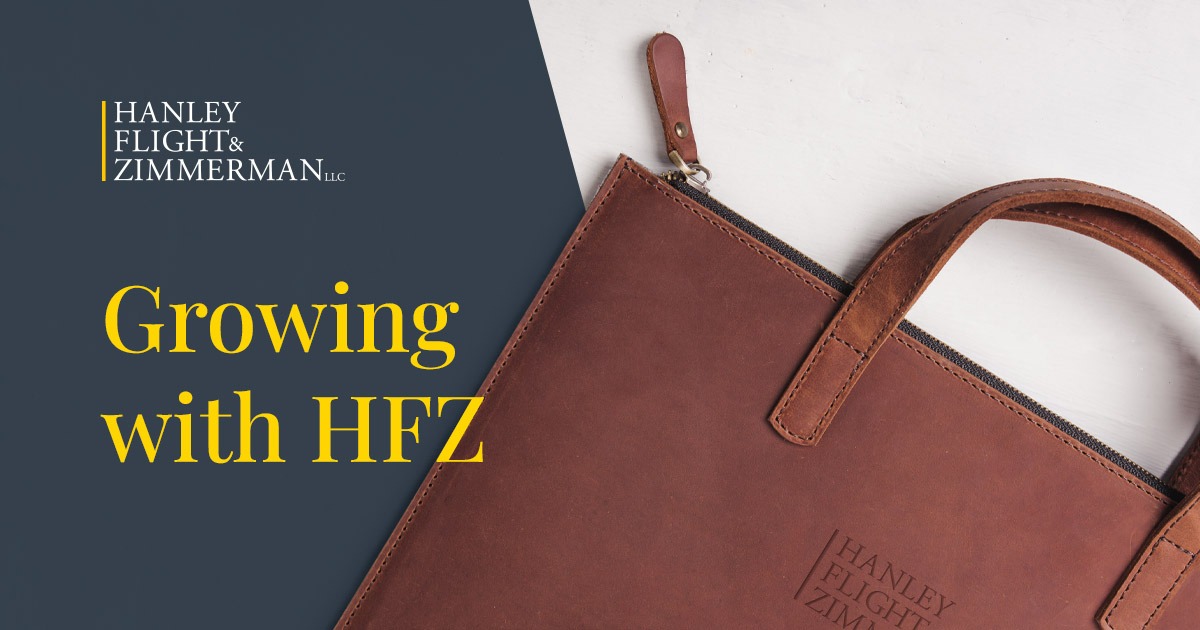 Hanley Flight & Zimmerman isn’t just trusted by the best companies in the country, it’s also earned the trust of its employees to be a supportive environment where their careers can take off.

James Redondo and Maggie Harrington are just two examples of how engineers can grow into patent attorneys with HFZ.

While Maggie is in the early stages of law school and James is a partner with the firm, both joined HFZ looking for a new challenge in their careers.

They saw patent law as a way to use their engineering skills and keep learning about technology. And after the firm hired them, both received mentorship and advice from colleagues at every step.

A math teacher goes to engineering school, and then finds a third career: Patent law

James, an undergraduate mathematics and education major, taught high school for five years before a friend thought he’d make a good electrical engineer. So James went back to college for a second bachelor’s degree.

At a career fair his senior year, James didn’t feel a real connection with many of the companies advertising engineering jobs. But HFZ’s table piqued his curiosity.

What James heard about patent law led him to apply for a job.

James started at HFZ as a patent engineer, writing applications.

“It tapped into my education roots, because you’re essentially writing an instruction manual or a textbook,” he said.

Then, after a year, he decided to enter law school, finishing his degree at night while working for HFZ in the day – a path many of the firm’s attorneys were familiar with.

“If they can do it, I thought I could figure it out too. And these patent attorneys are all like me. They’re all technical,” James said. “The experience I got writing patent applications helped me a lot with the writing that was required in law school.

“What they told me was true.”

Today, James offers the same advice to aspiring patent lawyers that he once heard as an engineer.

“It’s a lot of work, but it’s good work,” he said. “It’s fulfilling, it’s challenging, in multiple different ways. And you’re gonna grow a lot when you work here.”

Maggie joined HFZ shortly after starting her career as a mechanical engineer on the manufacturing floor of an aerospace company. Concerned her growth would be “stunted” in that role, she became interested in patent law and how it would allow her to use her degree and technical skills.

She applied for a job at HFZ and is in her second year as a patent engineer.

“I’m not a ‘sit back and let’s just coast right through the workday’ person,” Maggie said. “HFZ really pushes me. The attorneys have very high standards.”

She found her fellow patent engineers to be “some of the most motivating people ever.” They showed her how to balance work at HFZ with law school. HFZ’s mentorship program also added to her support system.

That convinced Maggie to go for her law degree.

“‘OK, I can do this,’” she told herself. “This is a great opportunity for me to pursue.”

Today, Maggie is six weeks into law school, taking advantage of the firm’s flex- and part-time policy that also gives employees time away from work for childcare or other responsibilities in addition to school work. HFZ also assigns each new employee to a mentor.

Before deciding to enter school, Maggie was “hyper vigilant” to how HFZ treated her fellow patent engineers who were in school, paying attention to their stress levels and workloads. Now she feels the same support when she needs to log off in the late afternoon to attend school.

“I knew going in that it would be a good situation,” she said of her decision to work and go to school.

Maggie said her confidence flourished from her first day at HFZ, when she was assigned a docket with her initials on it. In contrast with her engineering jobs, Maggie said she quickly felt comfortable adding her voice to discussions at HFZ.

“I’ve grown so much working for HFZ,” she said. “I feel supported and heard. I feel like I’m a member of the team. And I’m contributing, which is the best feeling to have in any job.”